What is the fire pump cavitation?

The cavitation means that when the liquid is at a certain temperature and the pressure is reduced to the vaporization pressure at the temperature, the liquid generates bubbles. When the feed water had started, the outlet valve has not been opened or the external load is greatly reduced, and the unit is under low load operation. At this time, there is only a small water flow in the pump or no water, When the water passes the pump, the friction heat generated by the impeller cannot be taken away by the water supply, so that the temperature inside the pump rises. When the temperature inside the pump exceeds the saturation temperature under the pressure of the pump, the feed water will vaporize and come into cavitation. 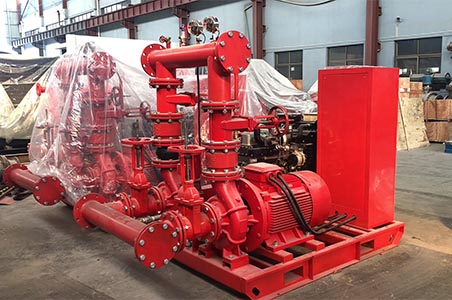 What are the detriments of fire pump cavitation?

As we all know, when the pump is in operation, a large amount of steam is generated to form bubbles. When a liquid containing a large amount of bubbles passes forward through the high pressure area in the impeller, the high pressure liquid around the bubbles causes the bubbles to sharply shrink and rupture. At the same time that the bubble condenses and ruptures, the liquid particle fills the cavity at a high speed, and at this moment, a strong water hammer is generated, and the metal surface is struck at a high impact frequency, and the impact stress can reach several hundred to several thousand atmospheric pressures, the impact frequency can reach tens of thousands of times per second, and in severe cases, the wall thickness will be broken down.

How to properly handle the fire pump cavitation?

First of all, from the perspective of prevention, it is recommended to open the recirculation pipe when the feed water flow rate is reduced to a certain extent, so that a part of the feed water flow is returned to the deaerator, so that there is enough water in the pump to pass the pump. The heat generated by the friction is carried away, keeping at a certain temperature from rising to vaporize the feed water.

Second, choose a manufacturer. In general, experienced fire pump manufacturers will consider such a problem before manufacturing a fire pump. The manufacturer generally specifies an allowable small flow value for the feed pump operation (eg, 25% to 30% of the rated flow). This approach can effectively prevent the water from vaporizing due to too little water. Modern high-speed feed pumps generally adopt variable speed regulation, which is low speed when small flow rate, and cavitation phenomenon is not easy to occur at low speed, so the allowable small flow rate is much smaller than the fixed speed feed water pump.

Next:What is a surge phenomenon? - ZJBetter