Analysis of engineering application of the submersible sewage pump 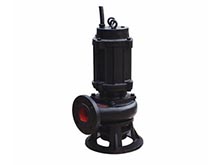 1. Compact structure and small footprint. Because the submersible sewage pump works under submerged liquid, it can be installed directly in the sewage tank. There is no need to build a special pump room to install the pump and the machine, which can save a lot of land and infrastructure costs.
2. Easy to install and maintain. Small submersible sewage pumps can be installed freely. Large submersible sewage pumps are generally equipped with automatic coupling devices for automatic installation, and installation and maintenance are quite convenient.
3. Continuous operation time is long. Due to the coaxiality of the pump and the motor, the submersible sewage pump has a short shaft and a light weight. Therefore, the bearing (radial) is relatively small and the service life is much longer than that of a general pump.
4. There are no problems such as cavitation damage and irrigation water. Especially the latter point brings great convenience to the operator.
5. The vibration noise is small, the motor temperature rises low, and there is no pollution to the environment.

It is precisely because of the above advantages that the submersible sewage pump has been paid more and more attention by people, and the scope of use is becoming wider and wider. It can be used to transport all kinds of domestic sewage, industrial wastewater, and construction from the original purely used to transport clean water. Site drainage, liquid feed, etc. It plays a very important role in various industries such as municipal engineering, industry, hospitals, buildings, restaurants, and water conservancy construction.

In order to improve the life of the submersible sewage pump, most manufacturers at home and abroad are looking for ways to protect the pump, that is, when the pump is leaking, overloading, over-temperature and other faults, it can automatically alarm and automatically stop the repair. However, we believe that it is necessary to install a protection system in the submersible sewage pump, which can effectively protect the safe operation of the electric pump.


But this is not the key to the problem. The protection system is only a remedy after the pump has failed, and it is a relatively passive approach. The key to the problem should be to start from the root and completely solve the problems of the pump in terms of sealing and overloading. This is a more active approach. To this end, we applied the auxiliary impeller fluid dynamic sealing technology and the pump's no-overload design technology to the submersible sewage pump, which greatly improved the pump sealing reliability and load carrying capacity and prolonged the service life of the pump.

First, the application of the sub-impeller fluid dynamic sealing technology

In addition to the sealing function, the auxiliary impeller can also reduce the axial force. In the submersible sewage pump, the axial force is mainly composed of the differential pressure force of the liquid acting on the impeller and the gravity of the entire rotating part. The direction of action of the two forces is the same, and the resultant force is the sum of the two forces. It can be seen that in the case of the same performance parameters, the axial force of the submersible pump is larger than that of the general horizontal pump, and the difficulty of balancing is more difficult than that of the vertical pump. Therefore, in the submersible sewage pump, the reason that the bearing is easily damaged is also related to the large axial force.

Second, the application of pump without overload design technology

In a typical centrifugal pump, the power always increases with the increase of the flow rate, that is, the power curve is a curve that rises with the increase of the flow rate, which brings a problem to the use of the pump: when the pump is When the design operating point is running, generally, the power of the pump is less than the rated power of the motor. The use of this pump is safe; but when the pump head is reduced, the flow will increase (as can be seen from the pump performance curve), The power also increases.

The so-called full head characteristic (also known as no overload characteristic) means that the power curve rises very slowly with increasing flow rate. More ideally, when the flow rate increases to a certain value, the power will not rise any more, but will have some Falling, that is to say, the power curve is a curve with a hump. If so, we only need to select the power rating of the motor slightly more than the power of the hump point, then in the entire range of 0 flow to maximum flow, you are in that one When operating at the operating point, the pump power will not exceed the motor power and the pump will be overloaded. It is very convenient and reliable for the pump with this performance whether it is selected or used. In addition, the motor power does not need to be too large, which can save considerable equipment costs.

Pre:The main factors determining the efficiency of the fire pump

Next:How to improve the running life of vertical pipe pump?