The working principle of self-priming pump

The pump body has a liquid storage cavity, and is connectted with the pump working cavity through the upper backflow hole and the lower circulation hole, forming a axial plus flow external mixing system of pump. After the pump stops working, a certain volume of liquid are stored in the pump cavity. When the pump is started, the liquid storage in the pump is carried by the impeller and is thrown upwards. The liquid flows back to the working chamber through the grid of the gas-liquid separation pipe, and the gas is discharged out of the pump to form a certain amount in the pump. The vacuum degree can achieve self-priming. During the second operation, a one-way check valve is installed at the suction port of the pump, so it can be started without adding water.

The 4 working processes of the self-priming pump: 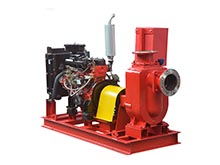 2. Vapor-liquid separation process: the vapor-liquid mixture enters the vapor-liquid separation chamber after passing through the pressurized water chamber. At this time, the flow rate decreases. Because of the large density difference between gas and liquid, lighter gas overflows from the outlet, and heavier liquid returns to the volute of the pump through the backflow hole connected to the pump casing due to its gravity and the negative pressure suction.

4. Infusion process: After the pump completes the self-priming process, it automatically turns to infusion operation, and its working process is same as the process of an ordinary centrifugal pump.